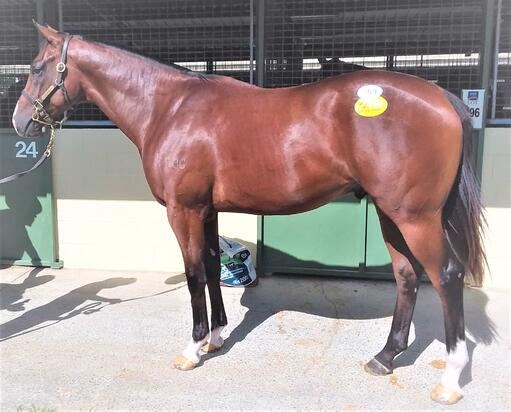 A well grown, attractive, athletic individual with a pedigree page bursting with Black type 2YO winners. A descendant of - and line-bred to - the legendary Pretty Polly, he can count amongst his relations the Gr.1 winners Half Hennessy (Queensland Derby), Catbird (Golden Slipper Stakes) and Ike's Dream (Queen Of The Turf Stakes) - as well as the fast Group winners County, Beans, Dieu D’or, Maizcay, Fitting, Danbird and Outrageous.

The colt’s dam Sphene (Fasliyev x Miss Fitting) was a winner of 2 races and has produced three foals to race ALL WINNERS. Her dam is a half-sister to Group 1 winner Half Hennessy.

The colt’s sire Rothesay has an excellent 62.9% winners-to-runners strike rate. On the track he was a 2YO winner and a multiple Group winner at 3YO. He kicked off his stud career in blazing fashion, being crowned Australia’s Champion First Season Sire by Winners. He has proven to be a reliably classy stallion, siring seven individual stakes winners (including Group 1 winning 2YO Rothfire winner of over $914K (please note the colt is bred on the same double Mr Prospector cross as Rothfire) and Group 3 winning millionaire Chapter and Verse (winner of $1,433,333).

The colt’s paternal Grandsire, Fastnet Rock was a Group performing 2YO and Champion 3YO Sprinter. Fastnet Rock is an international force in breeding and racing having produced, 41 individual Group 1 winners worldwide, he is a multiple Champion Sire and Sire of Sires.

His maternal Grandsire Fasliyev, was undefeated after winning all of his five 2YO starts, earning him the title of Europe’s Champion 2YO Colt. At stud he was awarded Champion First Season Sire with 34 individual juvenile winners (equalling the record set by End Sweep) he finished his career with 523 winners and 38 stakes winners.