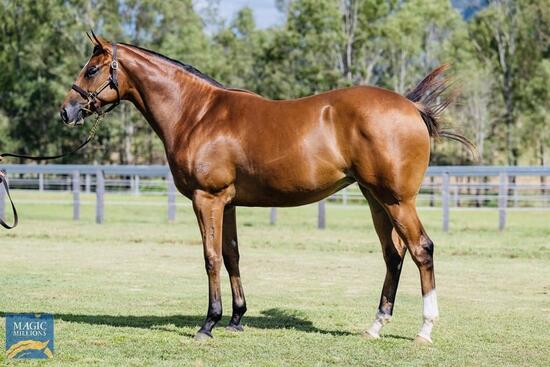 Super attractive filly which ticks all the boxes.  She is balanced, strong, athletic, an early foal, by a Champion Stallion, from a prolific winning dam line that produces tonnes of tough sound runners.

Her sire Spirit of Boom, winner of the Group 1 Doomben 10,000, is the reigning Champion Sire of Queensland having won the honour three years in a row. He has sired 15 individual stakes winners from his first four crops including millionaires Outback Barbie and Group 1 winner Jonker. Spirit of Boom has produced over 100 individual winners in the 2021/22 season including winners of the 2022 $500K QTIS Jewel 2YO and $500K QTIS Jewel 3YO.

Her dam Really Rhyming (Poet’s Voice) is a half-sister to multiple Victorian stakes winner La Chasseuse. The filly’s Grandam, Gerber  was a winner, stakes producer and half-sister to five stakes winners Cheverny, Fashion News, Academe, Vionneto and Spinning Jenny  who produced 14 foals, 13 to race and 12 winners of 55 races.  Gerber was a daughter of stakewinner Vionnet (producer of 9 foals, all raced, 8 winners).

Her maternal Grandsire Poet’s Voice was a Group 2 winning 2YO and Group 1 winning 3YO. One of the best sons of one of the most successful stallions in the world the great Dubawi (sire of over 100 individual Group 1 winners) and a son of Godolphin’s “greatest horse” Dubai Millennium.