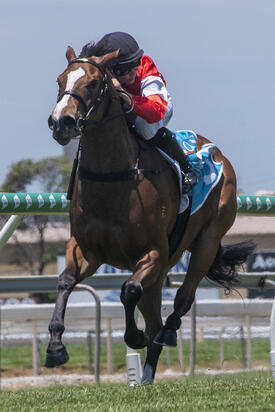 It is not often that the stewards’ comment on how beautiful your horse is as they check the brands before heading into the mounting yard but clearly Mouette was attracting plenty of admirers. The daughter of rising star sire, Better Than Ready out of the Exceed and Excel mare Seagull, is definitely a looker but she is so much more than good looks. With an impeccable temperament, healthy appetite and a quick turn of hoof she is ticking all boxes for an early 2YO. On Saturday, she debuted in the QTIS 2YO Maiden over the 900m trip at the Gold Coast. Ridden to perfection by Georgina Cartwright, Mouette (French for Seagull) showed good early speed to easily take the lead. As they made their dash down the straight, Georgina took a sneaky peek over her shoulder, to see how far ahead she was of her rivals before easing the filly down to score an impressive win. The hand recorded time was an impressive 50.97 seconds with a winning margin of 2.75 lengths. Mouette affectionately known as Tippi (after Tippi Hedren the star of the Alfred Hitchcock thriller The Birds) was purchased at the Magic Millions January Sale for $85,000 from the draft of Yarramalong Stud.