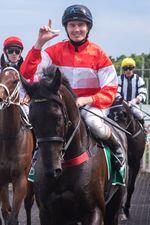 The beautiful filly, by Spill The Beans out of Hello I Love You, showed plenty of raw ability when she stormed home to win on debut in the QTIS 3YO Maiden over 1300m at the Gold Coast on Saturday. With the rail out 7.5m and drawing the outside barrier in the field of 13 runners it was little wonder she jumped at odds of $51.50 for her first race. After jumping well jockey Michael Hellyer gave her the dream ride as he allowed her to roll forward to easily take the lead. As she headed into the straight, she let down nicely, winning by a margin of 1.75L easing down. Bred by former principal of Greenvale Stud, notable horseman Werner Quast, the black filly is a stunning image of her maternal grandsire the “Black Flash” Lonhro. Purchased at the Magic Millions March Sale for $36,000 she showed promise early but was temporary sidelined after a nasty track work accident. After some further education at Symphony Lodge the filly, affectionately known as Bonnie, soon recovered her confidence. With plenty left in the tank after Saturday’s win it looks like the filly may have an exciting future ahead.