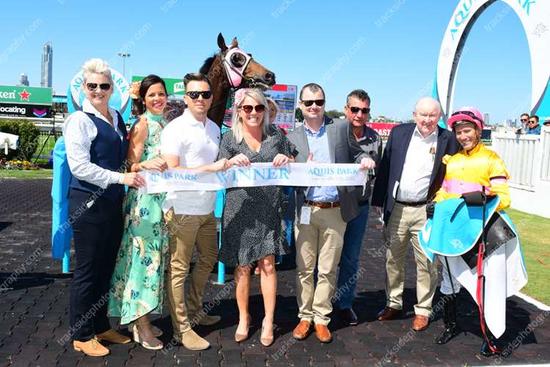 A brilliant ride by “King of the Gold Coast” multiple premiership winning jockey Daniel Griffin on Saute saw the gelding break his maiden at his first start back from tie back surgery. The extremely handsome son of Sizzling out of the Rock of Gibraltar mare Tipsy Lane was a stunning type at the Magic Millions January yearling sale. He showed plenty of ability early on in his jump outs but failed to produce the same magic in his first four starts. Strangely he made no noise so his wind issue was not picked up until in desperation to find the cause of his poor performance he was given and endoscopic examination. The result was that he was 100% paralysed on the left side of his larynx. Under the skilful hands of Equine Surgeon Associate Professor Ben Ahern Saute has made a triumphant return to the track. Despite doing absolutely everything wrong in his race including, over racing, travelling wide and laying in down the straight Saute finished the best of the field to the absolute delight of all connections.