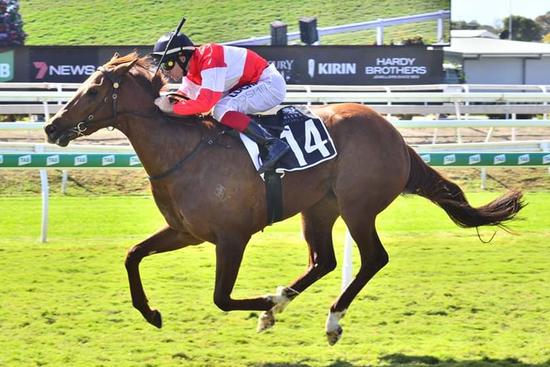 Danny has always been more of an observer than a talker and so when he quietly told connections that he was impressed with Ginger Rock they listened. Their patience in giving Danny the time, to develop her talent and allowing the filly to furnish, is starting to pay off.


After an impressive barrier trial at Doomben, her first start was in a QTIS 2YO Handicap at the mid week Metropolitan meeting, held at the Sunshine Coast. As can often happen in first starts, things didn't quite go to plan, as Ginger Rock was held up for running before the straight. Once she got clear she looked like she would let down beautifully but twice incurred severe interference that resulted in her being shoved over the camber of the track. The loss of a front shoe in running certainly didn't help so all in all connections were pleased that she held on for third.

All that was forgotten though, when on the last Saturday meeting of the 2YO season, Ginger Rock delighted connections by scoring an impressive win at Eagle Farm, in the Ascot Green QTIS 2YO Handicap. The gorgeous chestnut filly, by Rothesay out of the Stakes winning Sequalo mare Seconde, was ridden to perfection by Dale Smith. The win, at only her second start, takes her earnings to $84,450.

Ginger Rock was purchased last year at the Magic Millions March Yearling Sale for $38,000. Offered under the Eureka Stud draft (as agent) she was the result of a foal share arrangement between trainer Rex Lipp and Boucher Breeding and Racing. Ross Boucher, has become a trusted friend and loyal client and we have purchased several horses that he has bred. To date, of the four that have raced, all have become Metropolitan winners (Snitzel's Joy, Mittere, Crafty Spirit and Ginger Rock).

Whilst Saturday's Metropolitan 2YO win has covered expenses and no doubt secured Ginger Rock's future as a broodmare this is only the beginning for this talented filly.