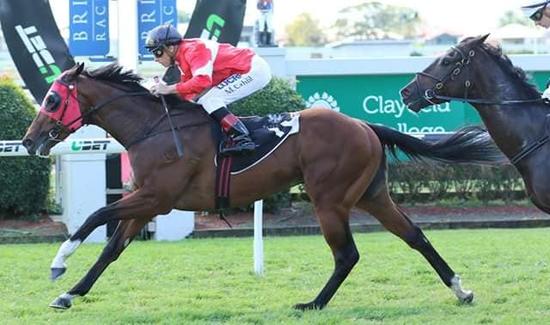 What a thrill for all the connections that Mittere broke his maiden in the QTIS 3YO Handicap on Saturday at Doomben. As a QTIS registered horse he picked up a tidy $67,200 for his effort. He was ridden to perfection, by Michael Cahill, who took advantage of his good barrier draw, light weight and the colt’s undeniable speed. Wearing blinkers for the first time certainly sharpened Mittere up and had him focused on the job. Michael was very complimentary of the colt’s turn of foot he showed when he asked him to let down in the straight. Danny has always had a very high opinion of Mittere who gave connections, a glimpse of what was to come on debut at the Sunshine Coast, when he fought hard down the straight against the highly fancied Racecourse Road. He was probably a bit unlucky in his run at Grafton as he missed the start and made his run a long way from home to still finish in the placings. Ballina also proved to be a bit too tight a track for such a large green horse. Unplaced, at only one of his five starts, it was very rewarding to see him win in such grand style with so many owners in attendance. We believe this is only the beginning of a successful racing career for the son of Smart Missile as we have always thought he will start to show his best in the spring of his 3YO year.