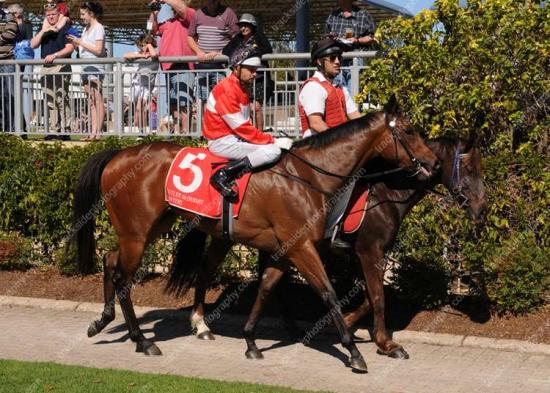 What a thrill for all of the connections when Snitzel’s Joy won on Sunday at the Sunshine Coast Turf Club. The beautifully bred daughter of Snitzel out of the winning Spectrum mare Rainbow Joy (herself daughter of Magic Millions winner Dancer’s Joy) has had more than her fair share of setbacks. Purchased at the Inglis Easter Yearling Sale the filly was given a couple of months off to mature after the sales. When she returned from the breakers we were devastated to find that she had torn her hamstring off the bone and was running a very high temperature. Careful nursing and lots of rehabilitation got her back on track. All along Danny was confident that the filly had ability but keeping her injury free has been a struggle. At her first start she burst from the gates with such acceleration that she slipped and tore her hamstring on the other side. More rehabilitation and months of rest until she was finally ready to come back into work. All of the hours of care by Danny and the Falvelon Lodge team not to mention the incredible patience of the filly’s owners finally paid off on Sunday. Again her fast twitch muscle got her almost a length ahead of the field from the jump. Challenged by another runner, jockey Brad Stewart rode the filly superbly keeping her balanced as he guided the still green filly around the bend. Once around the corner Brad Stewart sunk down into the saddle urging her with hands and heels to quicken. With her ears pricked she put a couple of lengths on her nearest rival and won easing down in a speedy 58.3 for the 1000m on the big Sunshine Coast Track. Raceday Photo thanks to Trackside Photography