Another impressive win in the bag for Rogali 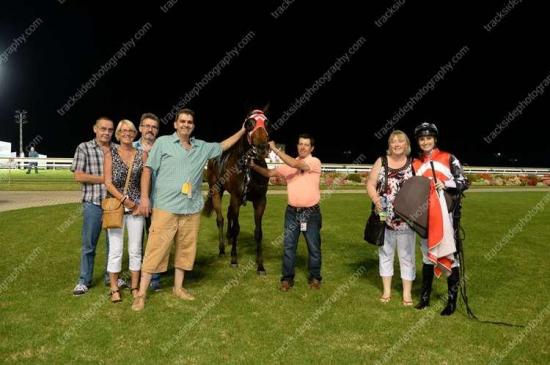 Last night Rogali ridden to perfection by Cassie Schmidt recorded his third win this preparation from 5 starts.  We are thrilled for the McDonald’s and of course their family and friends who seem to all follow and punt on Rogali.  Last night was a real family affair with Alison and Roger celebrating the win at the Sunshine Coast with his two brothers and sister in law.

The amusing phenomenon is that all three wins of Rogali’s wins this preparation have been on the 18th of the month.  In addition to the wins he also ran a very good second and more recently ran sixth with only 1.7 lengths between him and the winner.  Despite that the bookies had him at $9 so the connections and their friends all celebrated last night.

Those that work on a daily basis with Rogali will tell you that he has not always been the easiest of horses.  He arrived at Falvelon Lodge as a highly strung, box walker who frequent kicked out and often broke the walls of his stable.   A couple of preparations later and under the guiding hand of Danny he is a very different horse.  Now happily residing in a yard with stable he is relaxed and easy going but unfortunately he hasn’t completely given up his habit of kicking the walls.  On the way to the races last night he lashed out in the float and took a big chunk of skin of his hip.

The handsome son of Henry The Navigator was passed in at the Magic Millions for $16,000 with a reserve of $20,000.  After some quick negotiations the McDonald’s bought him and he has now earned his connections $61,625 in prizemoney.  His owners love him like a son and he gives them both so much pleasure it is contagious.  As previously mentioned he has his own Facebook Page “Rogali The Colt” which features videos, photo’s and comments straight from the horse’s mouth.

We are thrilled that Rogali is making the McDonald’s dreams come true and look forward to many more wins and trophies in the future.