We're having a heat wave a tropical heatwave! 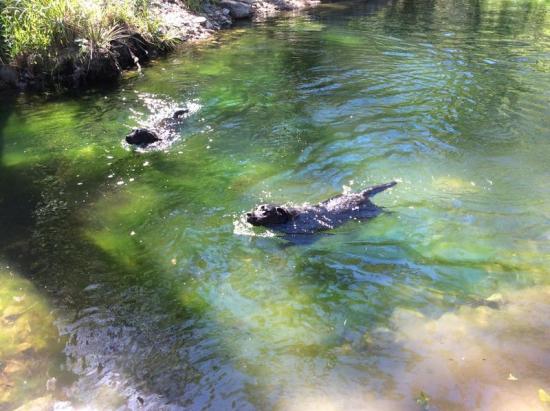 If it is not one thing it is another in the life of a racehorse trainer.  After a week away at the Gold Coast to attend the Magic Millions (Danny still came back for track work most mornings) we returned to a horrendous heatwave.  The last week has been excessively hot in Brisbane with temperatures in the high 30’s all day and into the evening.  With the humidity level at a consistent 90% plus it was really taking its toll on the horses so we had to come up with ways to try to keep them cool.

They say that only mad dogs and Englishmen go out in the midday sun so it was a measure of Danny’s care of his horses that he was up on the metal roof of the stables in the blistering heat rigging up a soaker hose system.  As the mercury hit 39 degrees it was obvious that the heat was really starting to take its toll on some of the horses as they sweated up just standing in their stables.

Even the chooks had to be placed in buckets of water as they couldn’t sufficiently cool down in the heat.  It was a pretty hilarious sight to see them all sitting in individual buckets bouncing up and down in the water and even funnier to see how they looked with wet feathers.
As an extra embuggerance to the horses the recent rains had increased the flies and mosquitoes population to plague proportions.  A quick trip to Bunnings saw Danny and I armed with a range of fly baits, mosquito zappers and fans.  The good news is that the soaker hoses did the trick and thanks to the BRC we finally have ceiling fans in the main barn.

Hope that you have all found ingenious ways to keep cool like our Labradors who sensibly haven’t left the air-conditioning for over a week except to go to the farm for a swim.