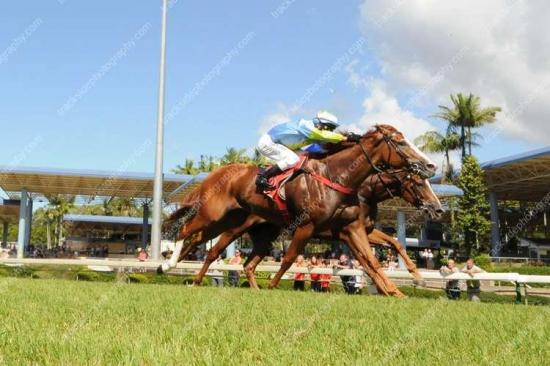 It was such a thrill to see Dancing Warrior scored such an impressive win on Sunday with top class jockey Dan Griffin aboard.  On returning to scale Dan commented that he jumped well and as a result he was a little more on the pace than he had planned but he felt that he had a lot of horse under him and Dancing Warrior was travelling beautifully.  As he came into the straight Dancing Warrior kicked away but was challenged all the way up the long straight of the Sunshine Coast Turf Club by highly fancied runner Homehill.  As the two chestnuts battled it out they put a good six lengths on the rest of the field.  Although starting to tire from being on the pace Dancing Warrior fought on to salute the judge in  thrilling finish.