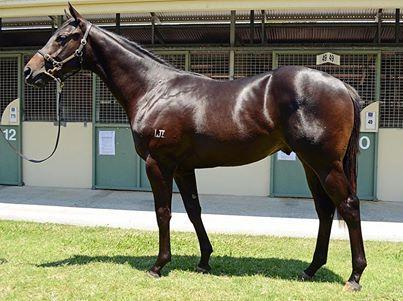 The colts pedigree and presence made him a genuine stand out with Danny writing a brief but accurate note in his catalogue “A +. Beauty. Typical Lonhro. Great Walk”

His sire Lonhro (nicknamed “The Black Flash”) won 26 of his 35 starts including 11 Group Ones and 18 starts at Weight for Age.  His winning strike-rate (74%) is the highest of any Australian champion with a comparable number of starts since the introduction of the award, and is higher than that of four of the five inaugural Hall Of Fame inductees (Phar Lap, Bernborough, Tulloch, and Kingston Town) and second only to Carbine (who raced more than 100 years earlier). Lonhro's winning strike-rate in Group One races (64%) is the highest of any comparable Australian champion since the introduction of the system, including Kingston Town.

Shuttling between Darley Australia and the USA, Lonhro has been a tremendous success, as a sire of 5 individual Group 1 winners, including 2012 Golden Slipper and Triple Crown winner PIERRO.

The colts paternal Grandsire OCTAGONAL (nicknamed “The Big O”) was awarded Australian Champion 2YO, Australian Champion 3YO and Australian Horse of the Year.  Octagonal retired to stud after 28 starts with a record of 14 wins (10 x Group 1’s) 7 seconds (6 in Group I or Group 2 level) and a third. He ended his racing career with a stakes tally of $5,892,231 the highest of any galloper in Australasia to that point.

The colts dam Oh So Discreet (by Bluebird) recorded 3 wins and was multiple stakes placed earning prize money of $100,470.  She is a half-sister to Group winners BE DISCREET, GILDED ANGEL and SHE’S DISCREET (dam of stakes winners Forever Discreet, I’m Discreet, Very Discreet) and stakes winners My Advocator and Oahu.

Oh So Discreet has been a wonderful producer with six foals to race all winners including Group 1 winner MAYBE DISCREET, Group 3 winner JUST DISCREET and Group 2 placed Always Discreet.

The second dam Halo Again was a stakes winner and Group 3 placed who produced seven foals all winners.  She is a full sister to stakes winner Secrets and half-sister to Group winner Oriental Ruler.

With a stallion’s pedigree, stunning looks, wonderful temperament, by a legend of the Australian Turf out of a stakes performing mare and a maternal pedigree which consistently produces Group and Stakes performers this colt has it all.

A full pedigree page is available under HORSES AVAILABLE