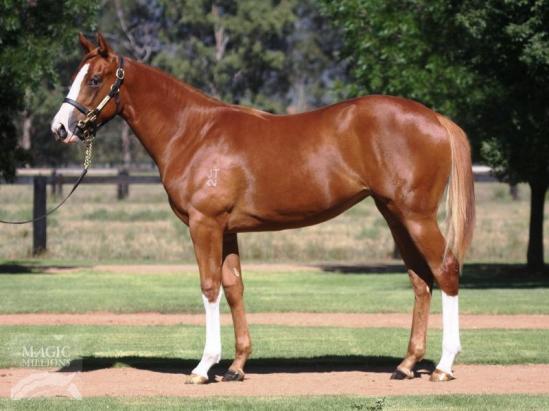 This filly is well grown, beautifully balanced and has a great temperament.  She has an outstanding athletic walk with huge overstep and great swinging use of her hindquarter.  As you can see she is a very flashy chestnut with two long white stockings on the near side fore and hind and a big baldy faced blaze.  She has a lovely slope to her shoulder, short back and powerful rump.  Given that she is an early foal and based on her pedigree we anticipate that she should be an early type.

The filly’s sire Snitzel needs little introduction as the performances of his early maturing, classy progeny have seen him jump straight to the top of the General Sires List and the 3YO Sires List based on earnings.

The progeny of Snitzel did extremely well at the 2014 Magic Millions.  His three year old filly Sweet Idea, a runner up in the Magic Millions 2YO Classic the previous year, took out the $1 Million 3YO Guineas. Whilst Oakleigh Girl (trained by Dan Bougoure) was a courageous runner up in the $2 Million 2YO Classic, scoring a further $325,000 (in addition to the $300,000 2nd prize money) for her owner, by winning the Women In Racing Bonus.

As a racehorse Snitzel was sound, clean winded and a star racing only at the elite level:

Rated Second on the 2005-06 Australasian 3YO Classification (Sprint)

The filly’s dam Dance Girl Dance (by Made Of Gold) was a metropolitan winner of seven (7) races to 1350m and was stakes placed multiple times earning career prize money of $256,050.  She is a half-sister to Group 2 winner Hollowlea (by Hidden Dragon).

This is Dance Girl Dance’s second foal, the first foal a filly by Not A Single Doubt, has been retained by her breeder.  The mare has a Stratum foal at foot and is again in foal to Stratum.

The second dam Cabaret Girl (by Scenic) was a Sydney metropolitan winner of 3 races and a full sister to stakes winner Panorama Heights.

A full pedigree page is available under HORSES AVAILABLE