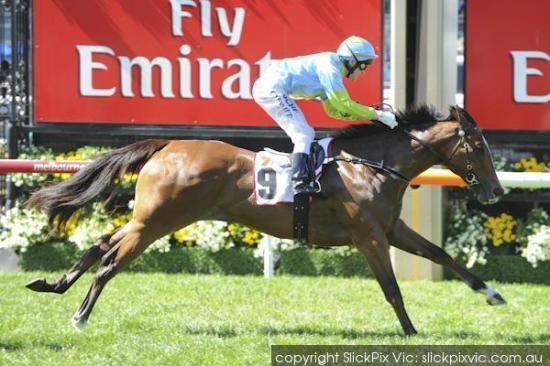 When Danny privately declared last week that ‘Oakleigh Girl is the fastest horse he has trained’ I must admit I did a double take.  As the trainer of dual International Hong Kong Sprint winner and former Australian Sprinter of the Year (Falvelon) I thought that was a huge statement.  Danny clarified “I am not saying that she is the best just the fastest”.

In the first race on Melbourne Cup Day, we all got to see why Danny had been super confident as the 2YO filly, cleverly named Oakleigh Girl, demonstrated her blistering speed to lead all the way to win the Group III Channel Seven Stakes (Ottawa Stakes) on debut.

The journey began 10 months ago, in January 2013 at the Magic Millions Yearling Sales, when Danny inspected a well grown, sound and correct filly from the Arrowfield Stud draft.   Out of Group 1 winning dam, Miss Kournikova and by Group 1 winning sire Snitzel, the filly possessed an impeccable speed pedigree.

As a hint of things to come the Arrowfield staff had nicknamed her ‘Special K’ because she had shown that little something extra from day one.  Once she came into Falvelon Lodge Danny was constantly impressed as the filly did everything right, showing a maturity well beyond her years.  Even in the early days she would flatten her ears back wanting to race the other yearlings.

After showing natural talent, in her two short jump outs, Danny and her owner made a decision to fly Oakleigh Girl south with Group Winner Longport for the Spring Racing Carnival.   Oakleigh Girl travelled beautifully and has thrived on all of the new experiences at Flemington.

Once settled into her new stable, within Tommy Hughes barn at Flemington, the next step was an 800m Barrier Trial at Cranbourne with jockey Craig Newitt aboard.  Again she passed with flying colours by winning and recording the fastest time for the 2YO heats.  After her final pre-race gallop Danny was confident that he had her spot on for her first start.

Displaying the blistering speed of her Oakleigh Plate winning parents (Snitzel 2006 and Miss Kournikova 2001) Anna, as she is affectionally known, hit the front from the bounce and lead all the way travelling as straight as an arrow down the Flemington track.  The time for the 1000m G3 sprint was 57.51 on the Dead 4 track with the final 600m in a smart 32.95. Tuesday’s win gave the filly invaluable black type plus a stake of $72,000.

The next day Oakleigh Girl, headed to the paddock to spell for the week at our chiropractor Michael Bryant’s property.  All reports are that the filly is happily resting in the paddock once used to spell the legendary mare Black Caviar.  Next week she will fly home to Brisbane to commence her journey to the $2m Magic Millions 2YO Classic (1200m) at the Gold Coast on January 11th 2014.