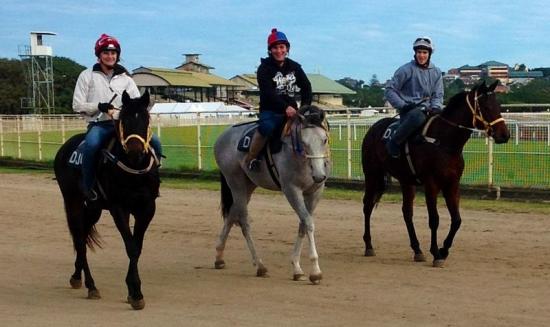 Congratulations to the connections of Chilwero on his first start win last Thursday at Rockhampton.  Although no doubt destined for bigger and better things Danny thought that trip north would sharpen him up and the long straight at Rocky would be ideal for his first start.  Whilst he raced very greenly his soft win by 3.2 lengths showed that he has a lot of raw natural talent.  His rider apprentice jockey Cassandra Schmidt did a great job and scored another win and second placing from her next couple of rides on the card.

Cassandra Schmidt also partnered Our Gardy for us in his first start at the Sunshine Coast the day before.  Slow away, Our Gardy made up a lot of room, to finish strongly coming second.  His best work was in the last fifty metres indicating that he will be more competitive over a slightly longer course.

The Magic Millions yearlings are now back in the paddock after having spent a few weeks in the stable furthering their education.  All four did exceptionally well and Danny is thrilled with their progress.   It is always exciting to see how they have matured when they come back in for their next preparation.

Attached is the Lonhro, Redoubte’s Choice and Magic Albert colts returning from their mornings work.