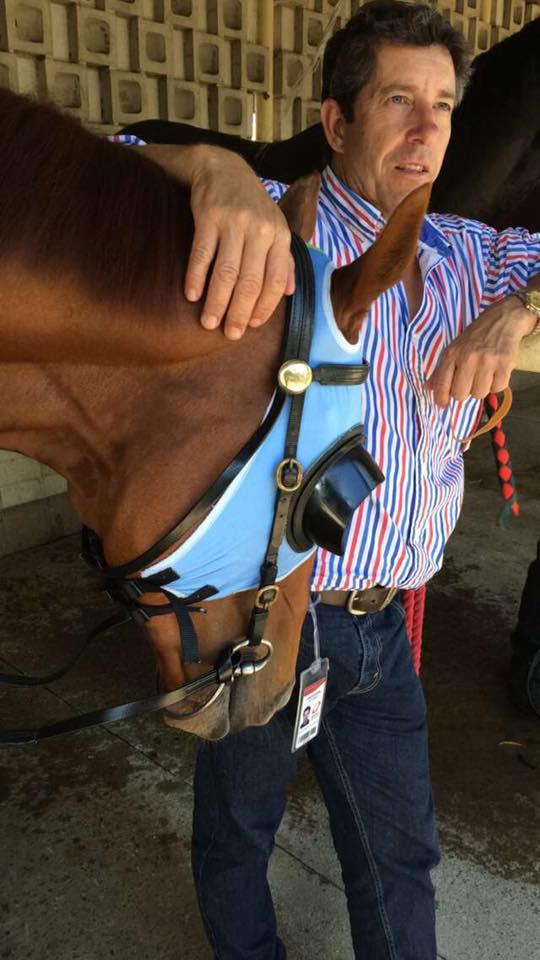 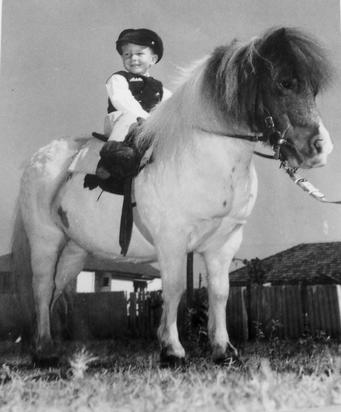 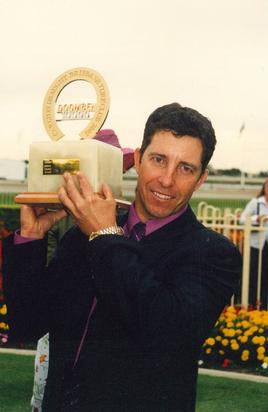 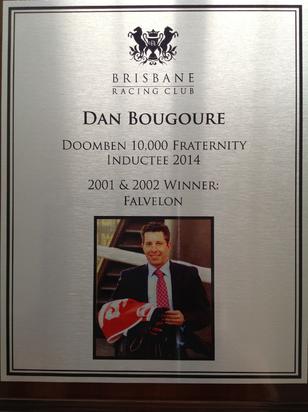 Born into racing Danny Bougoure is a second generation racehorse trainer. His father, the late Doug Bougoure, had started off as a jockey then went on to become a trainer, who always managed to produce a good horse from a small team.

A natural horseman Danny was riding well before he could walk.  His father would sit him on the front of the saddle as a baby and they would ride together around the neighbourhood. At a mere 18 months of age Danny was riding the stable pony without any assistance.

It was a natural progression that Danny began breaking in racehorses with his father, at the age of twelve and s

portly after began riding track work. As the strapper and work rider of his father’s best horse, the superstar galloper Strawberry Road, Danny learnt the feel of a good horse and was exposed to the pressures of racing early.

When his father became temporarily sidelined with pneumonia, the then 17 year old Danny was entrusted to travel alone to Victoria with the entire Strawberry Road for the Spring Carnival. Leading Strawberry Road back to scale after winning the 1983 Cox Plate still ranks as one of Danny’s racing highlights. This trip also gave Danny the opportunity to ride for and learn from Australian Leading Trainer Colin Hayes for a couple of months.

Danny took out his trainers licence in his own right at the age of 25.  He was quickly rewarded with black type success, when a handy galloper named Full Scope, won the Meynink Stakes. Group success was not far away when Nauders ran third, in the Group 1 Brisbane Cup.

It was the young bay colt Falvelon, which really put young Dan Bougoure’s name up in lights. Falvelon was an undefeated, Stakes winning two year old, who won his first seven starts. A dual Group 1 winner, he placed a further 8 times at Group 1 level. He remains the only entire to have won the Group 1 Doomben 10,000 twice he still holds the race record of 1.17.2 for his first win in 2001.

Falvelon went on to represent Australia on the International stage three times. He became the only Australian horse to win back to back Hong Kong International Sprints conquering the best sprinters in the world. At his final attempt Falvelon ran a gallant third.

One of Danny’s greatest achievements was to have prepared the entire Falvelon to win at the highest level from 2YO through to a rising 7YO. A measure of Danny’s skill as a horse trainer is that he was able to set Falvelon for feature races and unerring land the prize.

During his racing career Falvelon was crowned Queensland Horse of the Year four times and was twice crowned Australian Champion Sprinter. Falvelon retired to stud with career earnings (including bonuses) of over $4 Million which was at the time an Australian record for prizemoney earned by a sprinter.

However, Falvelon was not the only good horse in Bougoure’s stable.  He also trained Group 1 Emirates Stakes winner Scenic Peak who still holds the track record at Flemington for 1600m (no small feat as the course has been operational for 150 years).

In 2014, Danny Bougoure was inducted into the Doomben 10,000 Fraternity for his efforts in training Champion Falvelon to win back to back Doomben 10,000’s. That same year at the Queensland Racing Industry Awards, Danny Bougoure was honoured to have his Champion racehorse Falvelon, inducted into the Queensland Hall Of Fame for his performance on the track.This honour was especially meaningful as Danny’s late father Douglas Bougoure had received the same honour at the inaugural Queensland Hall of Fame awards with his Champion racehorse Strawberry Road.

On the same night as Falvelon was inducted into the Hall of Fame, the Danny Bougoure trained filly, Oakleigh Girl was awarded Queensland Two Year Old of Year.

After scoring her debut win, in the Group 3 Channel 7 Stakes over 1000m down the straight at Flemington on Melbourne Cup day (in the time of 57.51), Oakleigh Girl went on to take honours in the Listed Calaway Girl Stakes and was runner up in Magic Millions 2YO Classic. As the first horse past the post, fully owned by a woman, Oakleigh Girl also won the Magic Millions Women in Racing Bonus, bring her career earnings to $853,500.

First and foremost Dan Bougoure is a horseman and anyone who sees his horses quickly recognises how well they are conditioned. Danny trains out of a boutique size stable on course at Eagle Farm where the horses are given the individual attention they need to achieve their best.

Danny is well regarded and respected by other trainers as an honest and skilled horseman. To this day many visiting trainers, request to stay in Danny’s stables during the Queensland Winter Carnival, as they trust that Danny will step in and help their staff prepare the horses for the carnival.

Hi All,
A big big congratulations to Danny and all at the stable, on a fantastic Melb Cup Carnival. I was there yesterday to watch and celebrate the Longport win. I know Steve was over the moon and on the flight back,couldn’t stop talking about his week, just wished we had more time to celebrate yesterday!! Again congratulations to everyone associated, and thank you for a never to forget experience at the best race carnival in the world---I am sure there is more in store.

We are lucky to live close to Falvelon Lodge, thus it is very easy to visit the stables and watch their progress. We are sure you realize Danny and Marybeth 'care' very much for the horses individually besides it being 'business' and this is obvious in their attention to each horses' needs - they are not just a number. This, and many other fine points, gives us great confidence in a bright future for the stable - we feel lucky to be part of the clan.

Here's to sharing lots of success - and the patience in between that is all about racing !! :-)

Thank you for a great afternoon, always good to see PAUL and JAN as well. DANNY and MARYBETH are a very formidable combination and your hard work must pay off!!

I have racehorses with other trainers but what I like about Falvelon Lodge is the personalised attention for each of the horses. Danny has well trained staff and he makes sure that they always have the best interests of the horse at heart.

The relationship Danny and Marybeth have with the syndicates makes us feel like we are all good mates and I really enjoy the regular updates on how the horses are going.

I’ve had horses with Dan since 1995, throughout this time Dan has always put the horses best interest first and is very meticulous in preparing his horses for race day. It’s always a pleasure to drop by the stables and have a chat with Dan as he is happy to pass on his knowledge and his ideas.

I have a number of horses with Dan and the Falvelon lodge team. They are a pleasure to deal with and Falvelon Lodge is run with honesty and integrity with the welfare of the horses as first priority. As I have promising young horses Dan and and the team are working merticulously to ensure that all horses are given the optimum opportunity to achieve maximum results. I look forward to their regular updates.

We have been associated with Dan Bougoure as a trainer of 2 of our horses for almost 3 years. Dan trains his horses in a most professional manner. From our 1st meeting with Dan it was obvious to us the level of passion and commitment that he applies to all facets of his role as an outstanding trainer. Dan genuinely takes a personal interest in both the horses in his care as well as we their owners. We are kept well informed about out horse's progresses and in fact now view Dan and Marybeth as friends as well as business associates. We look forward to a continued and successful association with Dan Bougoure and his racing stable for many years to come.