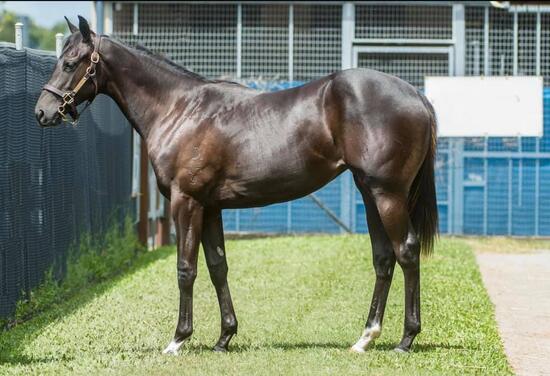 The sire provides 50% of the racehorse’s genetic material so it is important to purchase yearlings from strong, sound, prepotent, successful sire lines.

The filly’s sire, Spirit of Boom, was a fast and precocious three times 2YO winner, who possessed the speed, stamina and acceleration to win twice at Group 1 level (Doomben 10,000 and MVRC William Reid Stakes). Tough and sound, he ran 52 times amongst the best company in Sydney, Melbourne, Brisbane and Perth. He placed in the top 3 in 19 Group races, including five Group 1’s.

Since retiring to stud Spirit of Boom has been crowned Champion Sire in Queensland for the last two years. Leading Sire of 2YO’s, Leading Sire of Winners and Leading Sire by Earnings. He has sired 12 individual stakes winners from his first three crops including millionaires Outback Barbie and Jonker.

Spirit of Boom has always produced a great type but now we are seeing the attractive pedigree page to match the athletic individuals. The filly was conceived in 2018 (from the first crop from the higher service fee of $55,000) which has resulted in a premium selection of youngsters on offer in 2021.

Spirit of Boom’s sire Sequalo was among the top sprinters in an era of top class sprinters like Mahogany, Schillaci , Hareeba, Keltrice, Strategic and Gold Ace. At stud he was a prolific sire of winners with an enviable, winners to runners ratio of 69%. Sequalo passed on his temperament, soundness and speed and was twice crowned Leading Queensland Sire.

The dam provides the other 50% of genetic material so there are three important considerations when looking at dam lines: Race Record, Pedigree – female family and Broodmare Sire.

When considering the philosophy of “breed the best to the best” it is a nice box to tick to buy from mares who could gallop themselves. The filly’s dam Miss Milanese, is a Sydney Saturday Metropolitan winner, who has already produced two winners from three to race.

The filly’s dam, Miss Milanese, is the daughter of Group 1 Oakleigh Plate winning mare Miss Kournikova and a full sister to Group 3 winner Oakleigh Girl winner of $828,500. She is also a half-sister to stakes performer Anna’s Choice winner of $212,730.

The filly’s Great Grandam, On Centre Court, was a Melbourne Metropolitan Winner and produced 5 named foals, all raced and 3 winners including a Group 1 winner and Group 3 winner.

A prepotent stallion in the second line strengthens the case for a mare’s ability to produce stakes winners.

The filly’s maternal Grandsire Snitzel, was a superior racehorse who, like her dam, also won the Group 1 Oakleigh Plate. Firmly established as a Super Sire he continues setting new benchmarks of performance as a world-class sire and a big-race stallion par excellence.

Key aspects of Snitzel's lifetime performance are his world-class 10% Stakeswinners/Runners strike rate, his exceptional success as a sire of 40 stakes-winning juveniles and the durability & versatility that puts his progeny in Australia's best 3YO, sprint & mile races.

The filly ticks many boxes and is perfectly poised to reap the benefits of the QTIS filly bonuses which provide the opportunity to earn 50% more bonuses than colts or geldings. She will also be eligible for the QTIS Jewel Series.

As a March sale graduate, she receives a discounted entry fee into the Magic Millions race series. Not only will she be eligible for the MM 2YO Classic and 3YO Guineas but also the Fillies and Mares Race and the QTIS race in future years.

With such a strong female line the filly has the potential to be a successful broodmare in her own right once she retires from racing.