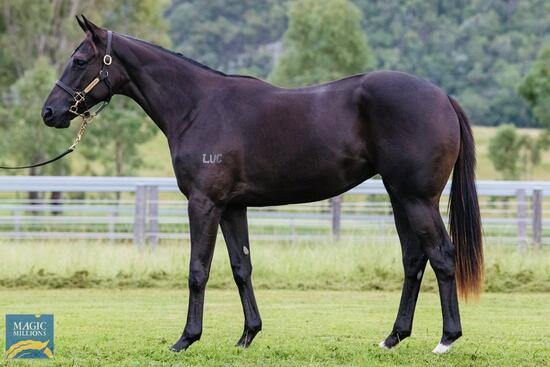 The breeders of the filly have retained a share in her ownership and are very excited for her future as they believe she is the best that the mare has produced to date.

The filly’s sire Rothesay was a multiple Group winning quality son of the all-conquering Fastnet Rock.

Rothesay started his stud career in blazing fashion being crowned Australia’s Champion First Season Sire by winners. He continues to produce an enviable winner to runners strike rate of 62%.

Rothesay has produced multiple stakes winners including Havasay, In his stride, Over Exposure and Too Good To Refuse and millionaire Chapter and Verse.

His outstanding son Rothfire (9 starts 7:1:0) winner of the Group 1 JJ Atkins and Group 2 Champagne Classic as a 2YO, has really cemented his position as Queensland’s most proven stallion at stud.

Important to note that the filly carries the same double cross of Mr Prospector as Rothesay’s Group 1 winner Rothfire.

Rothesay’s sire Fastnet Rock was a Group performer as a 2YO and a Champion Sprinter as a 3YO. As a sire he is an international force in breeding and racing like his sire Danehill. He has produced 41 individual Group 1 winners worldwide and is already a proven sire of sires with 8 of his sons already producing Group 1 winners.

Fastnet Rock has shown a great affinity with mares from the Nureyev line. The filly has Nureyev through her sire Fasilyev (Nureyev x Mr P’s Princess).

Fastnet Rock (with Danehill and sons) have also produced many Group 1 winners from Mr. Prospector line mares. The filly carries a double cross of Mr Prospector.

With 50% of the genetic material of any yearling coming from the dam line there are three key boxes to tick:

The first point is definitely ticked as the filly’s dam Sphene is by the multiple Group 1 winning 2YO Fasliyev who was undefeated in all of his five 2YO starts (twice at Group 1 and once at Group 3 level).

Fasliyev, a son of Champion sire Nureyev out of the Mr Prospector mare Mr P’s Princess, was crowned European Champion 2YO Colt and was rated the best of his generation in Europe with a rating of 125, a clear five points ahead of his nearest rival.

At stud, Fasliyev was crowned Champion First Season Sire with 34 individual juvenile winners (equalling the record set by End Sweep) he finished his career with 5 Champions, 523 winners and 38 stakes winners. Originally a Coolmore Stud Northern/Southern Hemisphere Shuttle Stallion he was eventually sold to Japan where he stood at stud for the rest of his life.

Point two is race record and Sphene also ticks this box as she was a winner on the track over 1000m and 1100m. She produced three foals to race, all winners, including winner of 8 races Rosinca and 2YO winner Charlie Sphene. Her dam is a half-sister to Group 1 winner Half Hennessy.

This very attractive nearly black filly caught our eye as a particularly racy type, she is a nice early 5th August foal and she is bred on the same cross as Rothfire.

Her dam is already a producer and the female page is bursting with bold black type 2YO winners. This makes her an ideal QTIS filly to capitalise on the lucrative QTIS filly bonuses.

It is important to note that QTIS fillies can earn up to 50% more bonuses than colts or geldings.

As a March sale graduate, she receives a discounted entry fee, into the Magic Millions race series.

Please note that there is no GST on the purchase of this filly.