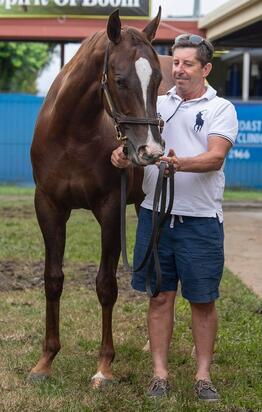 Defcon’s sire Choisir, was a trailblazing sprinter who travelled to England and won twice at Royal Ascot, including the Group 1 Golden Jubilee Stakes. He was a brilliant and consistent 2YO who developed into a World Class 3YO sprinter.

Choisir, was a dual hemisphere shuttling sire who sired stakes winners, every year of his 14 seasons at stud. Choisir is a successful sire of 11 individual Group winners amongst 97 stakeswinners.

The filly’s dam Seconde ticks all the boxes, a black type race record, a producer of winners, a strong female pedigree bursting with winners and she is the daughter of a successful prepotent Sire.

Wherever possible it is always preferable to buy from mares who could gallop themselves. The filly’s dam Seconde is black type and a winner of 5 races. She ran second in the Group 3 Dane Ripper Stakes and 3rd in the Listed Glenlogan Park Stakes.

Seconde has produced four foals to race all winners, including Metropolitan winners Real Ego winner of 7 races and $211,550 and the Danny Bougoure trained Ginger Rock who from 13 starts has recorded 3 wins, 1 second and 2 thirds and earnings of $157,350 to 2020-21.

The filly’s female family is bursting with winners as all three dams on the page have produced a very high winners to runners ratio.

Her Grandam, Beating the Odds, by the legendary winner producing sire Grand Chaudiere, produced 11 named foals, 10 to race and all winners. Even more important is the number of races her progeny won, with Hotshot Hayil recording 14 wins 3 in succession and Groovy Miss 8 wins and Truedough 5 wins 3 in succession

It is well known that a prepotent stallion in the second line strengthens the case for a mare’s ability to produce winners.

The filly’s maternal sire Sequalo was among the top sprinters of his generation which was an era that saw many stars such as Mahogany, Schillaci, Hareeba, Keltrice, Strategic and Gold Ace.

At stud, Sequalo was a prolific sire of winners with an enviable 69% winners to runners ratio. He was twice crowned Leading Queensland Sire and was widely acknowledged for instilling toughness, soundness and superb temperaments into his progeny.

When you look at the filly’s pedigree page you will see that the dam’s on this page produce winners almost regardless of the sire. It is a family that has an exceptionally high winners to runners ratio.

The progeny win, lots of races, which makes her an ideal QTIS filly to capitalise on the lucrative QTIS filly bonuses. Winning QTIS fillies can earn up to 50% more bonuses than colts or geldings.

As a March sale graduate, she receives a discounted entry fee, into the Magic Millions race series. Not only will she be eligible for the MM 2YO Classic and 3YO Guineas but also the Fillies and Mares Race and the QTIS race in future years. She will also be eligible for the QTIS Jewel Series.

Please note that this filly will be raced as a Ladies only horse.

We apologise if this offends any Gentleman but we had promised prior to the sale that we would select a ‘ladies’ owners only’ horse and the combination of outstanding looks and pedigree make this filly the perfect choice.